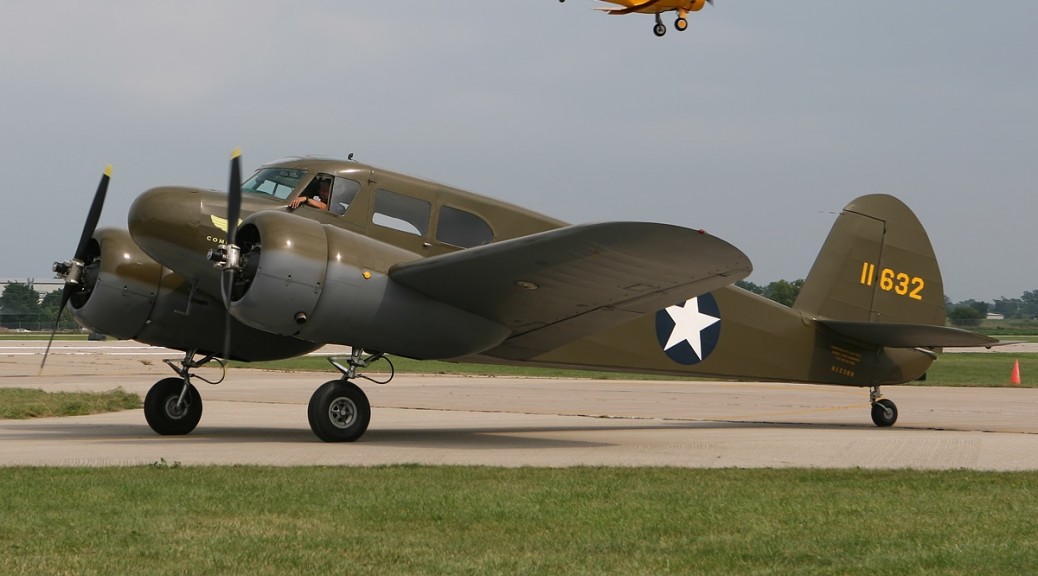 American manufacturer Cessna developed the first T-50 with wood, tubular steel and fabric covering in 1939. It had electrically actuated retractable primary landing gear and winged trailing edge flaps. Spruce spar beams were laminated containing spruce and the plywood ribs. Its fuselage was designed for accommodating two or may be three crew members. Non steerable full swiveling fixed tail wheel is also present. The military was looking out for existing aircrafts with double engines for serving as multi engine trainer. This was to fulfil the additional needs of different services.T-50 suited nicely as it wasn’t using many metals required for bombers and air fighters.

These were used as multi engine advance trainers by United States Army Air Corps. They performed other duties in war period apart from training. US military by the time World War II was over had 4600 units out of which 67 went to US Navy designated JRC-1s. RCAF had 822 units as Crane Is out of which many were used for British Commonwealth Air Training plan.  It was minimally used during the post war military period in North America.  The US Air Force had some of these aircrafts in September 1947 when it was established. Remaining military aircrafts were announced as obsolete in the year 1949.

Variant AT-17 aircraft was built as double engine trainer. Produced in United States, it was operational during the Second World War.  This was specifically in use to settle the gap that occurred between double engine combat aircraft and single engine trainers. AT-17 model was strengthened by the presence of double radial piston engines Jacobs R-755-9.  Moreover, T50 was the real commercial version out of which the AT-17 was made. The T-50 for its multiple utility was particularly designed for training and military services. A low cost carrier, it was suitable for short hops, take offs and landings.  Along with this model, the UC-78 was also a simple to fly aircraft that carried personnel, miscellaneous cargo, etc.

In the mid 50’s, this aircraft was seen in the television series called Sky Ring. Models like UC-78 and AT-17 were converted and also functioned upon floats. During the 1970’s, the total number of airworthy units was doubtful and they were considered obsolete due to the emergence of modern ones. Many aircraft fans and enthusiasts have restored these as antique pieces. The FAA registered database in August 2009 had the list of the main model and variants. Nationalist Chinese and Brazilians also used it in post war period.