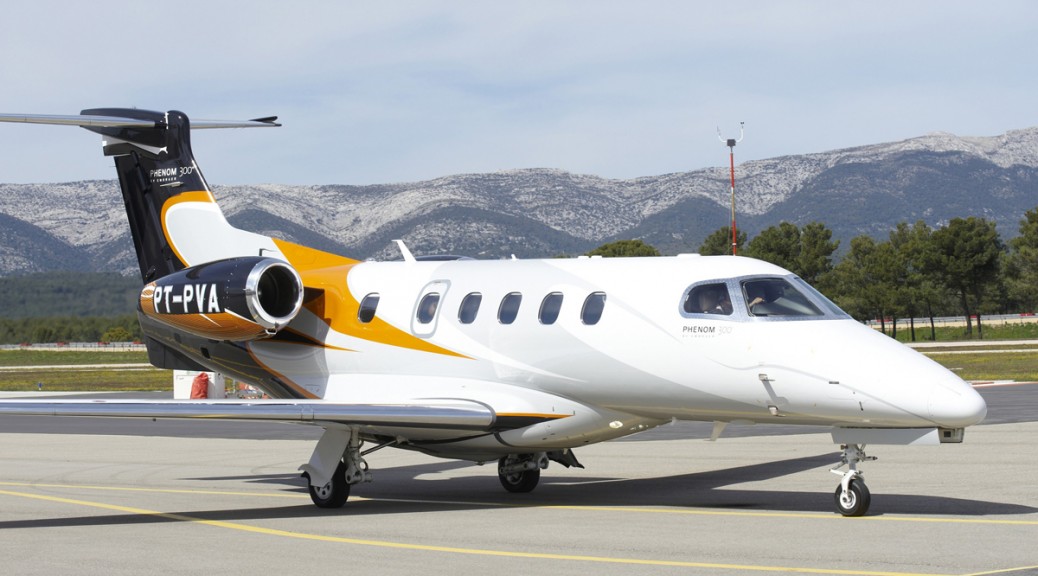 The Embraer Phenom 300 is a series of business jet planes from the Brazilian maker Embraer. The Phenom is considered as the most delivered business jet as it is potent of endeavoring rich in deck entertainment. The small jet has an anti-skid protector and has carbon brakes that offer longevity. The plane is powered with two Pratt and Whitney PW535-E engine and also comes installed with FADEC (health monitors and diagnosis). The airplane also has a 3365 lbf of maximum pressure per engine. The low carbon efficiency helps the airline fly with high fuel efficiency. The plane also has satellite connected in-flight systems. The jet has a maximum speed of 518 mph and take-off capacity of 7951 kg. The tipped nose small jet has a wingspan of 16.2 m and body length of 15.9 m. The flight has an altitude capacity of 2000 m.

The Embraer Phenom 300 is a rich in-class executive jet for private business meetings and small gatherings. The plane has a fast internet access and is equipped with LCD screens that work through satellite mode. The Phenom fleet is the only jet that has a hot air anti-ice stabilizer. The posh jet has a private rear lavatory with secured baggage areas. The comfort liner is also a winner of the Editors Choice Award from Flying Magazine. The hi-liner model can also have components of a semi Intensive Care Unit during emergency.

In April 2006 the Embraer Group launched Joint Definition Phase for the successor model of the Phenom 100, the Phenom 300. In May 2007 the makers extended the cabin space and flooring to increase the comfort level of its passengers. In the same year the Phenom 300 completed $ 1 billion orders from US powerhouse FlightOptions for their executive jet ownership company. The Phenom took the first official flight in April 2008 and getting certified by NCAA the year later. The latter years was marked with steep rise as the makers received firm orders to deliver its executive fleet. China received its first order in 2013 and the same year marked history for the jet as it got certified for the new Prodigy Touch Avionics Suite.

The flight is widely used by executive carriers like FlightOptions, NetJets Europe, FlairJet and AirDay. The jet has the most delivered status and its demand is subject to increase in the near future. The business flier has posh and lavish interiors and many important and reputed delegates ride it for official purposes. The Embraer has received more than $1.2 billion dollars of order from the United States to receive more units of the Embraer Phenom 300. Its successful evaluation from its predecessor Phenom 100 is a noted proof of its steep market demand.