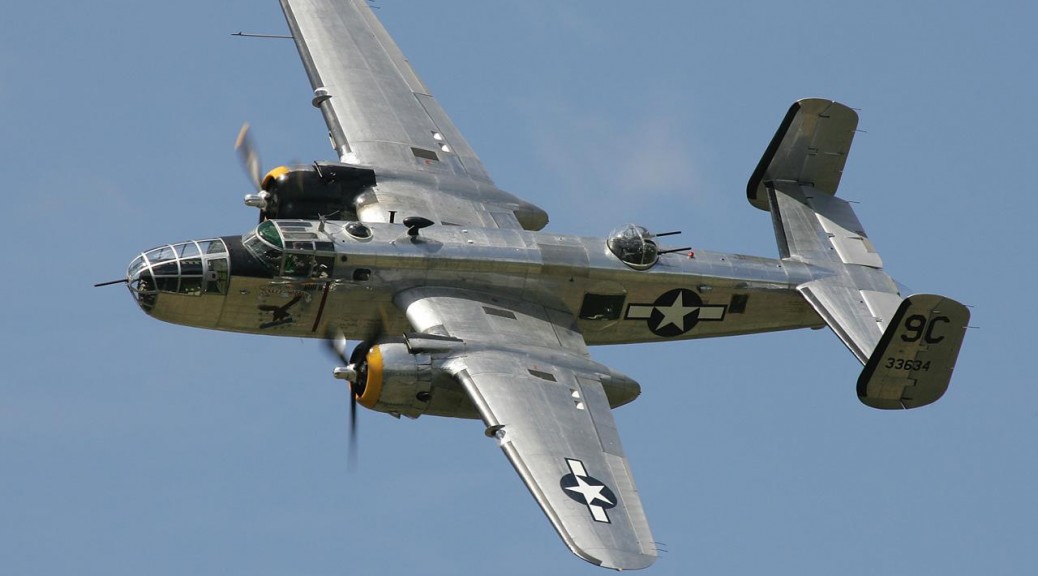 The B-25 aircraft was one of the widely used American airplanes for World War II. It was designed in the year 1939 as per specifications set by the United States Army. The first one was produced after 195,000 engineering man-hours and the contract for production went to North American Aviation. Initially it was made as three crew high placed wing bomber. Gradually it was modified to add other features to accommodate 5 to 6 crew members at different gun positions. B-25’s were primarily a dual engine design having radials mounted underneath both the wings.

The airplane was basically built for level bombing from a medium elevation. It was widely used in Pacific Theatre to bomb Japanese airfields. These destructive machines operated in multiple roles of tactical bombing, anti shipping strikes and tank bursting. Canadian Air Force used it for navigation training, transportation and photo reconnaissance. General Jimmy Doolittle used the medium bomber for the historical Tokyo raid that occurred in April 18, 1942. It was also used in operations related to strafing, submarine patrol and fighter plane by Allied Air Forces in the Second World War.

Originally, the B-25 Mitchell was developed by the North American Aviation. Over 9000 pieces were built by North American Aviation till the completion of Second World War at the production plants in Kansas and California.  The first designs of the aircraft limited the total crew to three. Later a fuselage widening increased the width enabling to seat the pilot and associate pilot sideways. The Allied Air Forces used the twin engine bomber plane as its standard weapon in World War II.   Apart from US forces, it was extensively flown by air forces of the Dutch, Australians, Chinese, British and Russians.

Throughout its career, the B-25 received numerous modifications. One of the main changes was in case of the G-model with 75 mm cannon and dual fixed .50 cal guns on the nose. In the H model extra forward firing elements were added. For the tenth anniversary of the Tokyo Raid, the B-25D-30-NC was modified to B-25B by the North American Aviation. In the early 1945, the B-25J model was assembled in the city of Kansas. However, it wasn’t used in military services. It also came into use as a civilian transport for almost 25 years. In 1975, it was found abandoned in Delaware’s Wellington Airport. It went under proper repairs and extensive restoration. The National Museum of  US Air Force had the model in 1958.