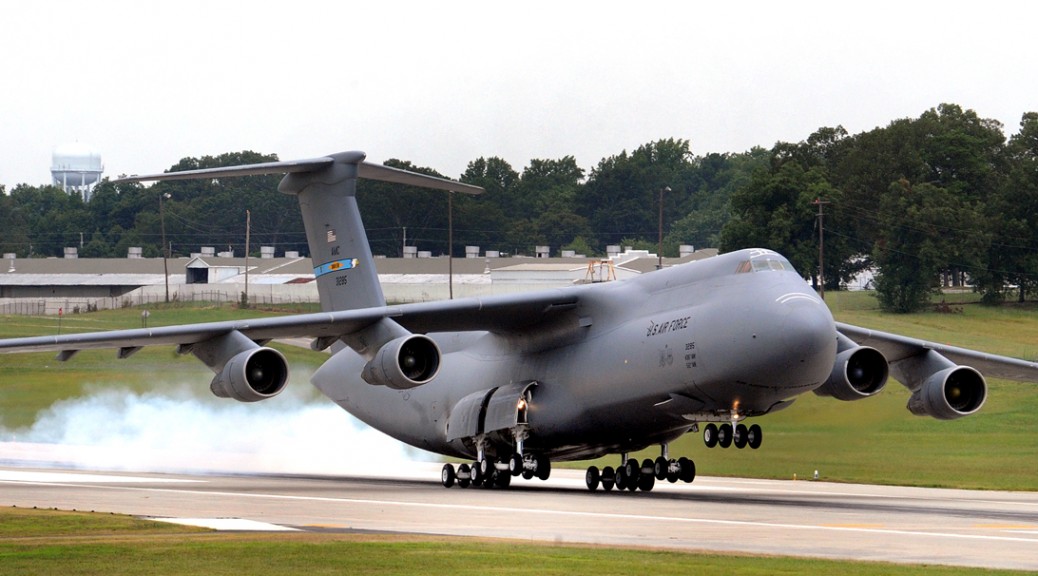 Lockheed Martin C-5 Galaxy is one of the largest airlifters in the world. It is specifically designed to carry equipment that no other aircraft prior to its development could carry. It features high-wing monoplane and has 2 decks. The lower accommodates cargo while the upper deck has room for more than 70 people, including the crew. Both front and the rear of the aircraft have cargo exit. Its entire nose opens as a lid to allow loading of A-10 Warthog, Mark 5 Special Operations boat and even C-130 transport aircraft, although detachment of parts of cargo is required as deem necessary. It is the largest aerial carrier in the US and the 3rd largest in the world, and it can carry 122 tonnes of load in total. The aircraft can lower to the significantly due to its kneeling landing gear in order to facilitate loading and unloading of the cargo.

Lockheed Martin C-5 Galaxy is one of the largest aerial carriers in the world. Its main purpose and the only purpose is carriage of military equipment and vehicles. The aircraft neither has armament nor can it be upgraded with any. In other words, it facilitates combat but does not directly participate in any.

C-5 Galaxy was conceived as result of the genuine need of American defence forces for an aircraft that could carry other military vehicles, boats and aircrafts to warzone. General Dynamics, Douglas, Boeing, Martin-Marietta and Lockheed submitted their models but only Douglas, Lockheed and Boeing were contracted to proceed with prototyping. Despite preference for Boeing design, the model of Lockheed was chosen due to a number of reasons.

Lockheed Martin C-5 Galaxy began operation in 1969, and was first utilised for its purpose during the Vietnam War the following July. Air Force bases at Altus, Travis, Dover and Charleston had been established for units that utilised the aeroplane.

The next major incidence when the aircraft proved its worth again was Operation Nickel Grass or Yom Kippur War in favour of Israel and to aid NATO countries in 1973.

C-5 Galaxy has been used in nearly every major war in which the US participated or allied with the engaged nations. It actively served the purpose during the Gulf War, in favour of the coalition forces. A few years later, the Afghanistan conflict highlighted the utility of the aircraft.

C-5 Galaxy is used to deliver aids and supplies to the American base in the Antarctic, and it is the biggest aircraft that fly to the region.